In 2007 I was laid off in a corporate restructuring from UBS, the Swiss investment bank that resulted from the merger of Swiss Bank and the Union Bank of Switzerland. While still employed I made the following proposal for the creation of an office dedicated to dealing with possible internal sociopathic transgressors. 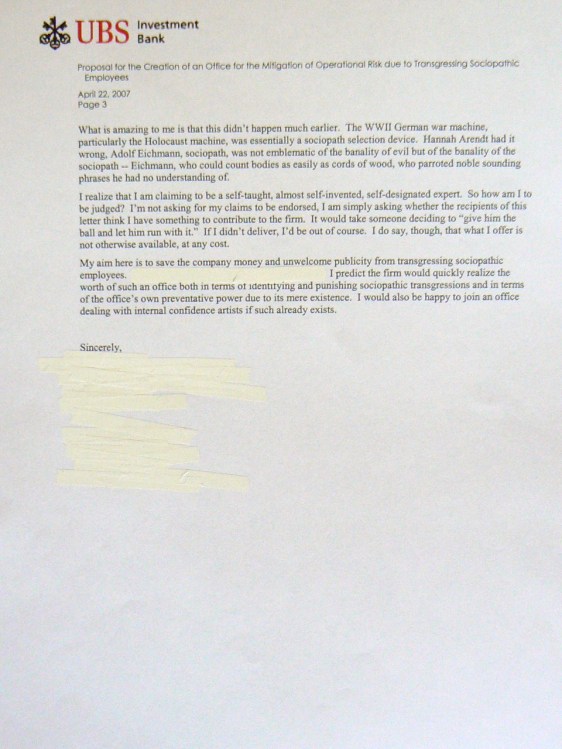 Obviously, UBS did not take me up on this offer or I wouldn’t be writing this. In my opinion, the biggest problem UBS/Swissbank has with sociopaths springs from the holocaust gold reputation of Swiss banks. The holocaust gold crime and its justification, explication, and defense are all sociopathic in nature (even if not in fact always carried out by actual sociopaths) — essentially all sociopaths would recognize this. Asking a sociopathic banker whether he was troubled by the source of holocaust gold would be like asking a sociopathic athlete whether he was ashamed to have gained the top of the podium by cheating. They would both think that the questioner was the one with the problem. It is my opinion that sociopaths might seek employment at UBS hoping for the freedom to carry out their own white collar crimes.

I believe all large-scale corporations should have such an office. Mega corporations provide far too many opportunities for confidence crimes. It is my belief that you simply cannot understand white collar crime without a deep understanding of sociopathy. Thus I am sharing this letter and the ideas it contains.

Finally, the only true kind of economy is a value-added economy. If a company asked to be chartered (incorporated) so it could run a business with a printing press and print more dollars, it would not be allowed. Such a business would add nothing to an economy. Well, how about speculative bubbles and runaway speculators? What’s the difference? There is no such thing as a bubble economy, kept afloat by inflating one bubble after another. Sociopaths cannot understand this, adult cause and effect are beyond them. Their analysis stops at ‘money in my pocket, good,’ ‘money not in my pocket, bad.’ To this day, sociopaths continue inventing perpetual motion machines — cause and effect are truly beyond them. A speculative economy is the economic equivalent. A Dow of 35,000 — sure, why not? A triple-A rating — sure, why not?

As this speculative binge gets wrung out of the economy, investment banks will need to rebuild the public’s trust in them. I believe such an office as I suggested would help any bank regain that trust.

The issue of corporate sociopathy is going mainstream. For example, see Snakes in Suits, Babiak & Hare (included in Links to the right) or The Corporation: The Pathological Pursuit of Profit and Power, Joel Bakan.

As far as I’m concerned UBS is a psychopathic/sociopathic entity and should lose its corporate charter.  This is borne out in it’s history — its close working relationship during WWII with Nazi Germany and its later Holocaust Gold scandals.  I have never worked with higher percentage of psychopaths in management anywhere else.  The woman, who hired me, simply walked out one day with zero notice and went to work for another Wall Street firm.  It was my understanding that she had found her authority frequently ignored with no consequences, which is what one would expect in an organization dominated by a secret male sex club with members from all levels, which is what one would expect from a psychopathic business entity.

3 thoughts on “Proposal to UBS”