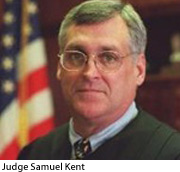 Kent sentenced to 33 months behind bars

Congressional impeachment proceedings will likely begin today against U.S. District Judge Samuel Kent, who was sentenced to 33 months in prison Monday for lying to those investigating him for sexual misconduct.

“I submit myself humbly to you,” Kent quietly told the Senior U.S. District Judge Roger Vinson in a chilly courtroom with more than 50 onlookers. “My sincere apologies to all concerned.”

Kent, who loudly proclaimed his innocence in court in the early days of this case, could not be fully heard in court Monday when he apologized for his crimes. He said he was “completely broken and in some ways a better person for it.”

The most emotional moments came when Kent’s two victims [. . . ] stood sometimes tearfully to ask Vinson that Kent be properly punished for using his power to manipulate and abuse them.

“He said he hated bullies. How sad,” Wilkerson said. “He’s the biggest bully of them all.”

She said she believes Kent is “crazy” and she fears for her family’s safety.

“His will, expressed or implied, was considered to be the equivalent of a decree,” [Judge] Vinson said of the perception of Kent in the Galveston federal courthouse.

Prosecutors said Kent, known for his wit and his willingness to berate attorneys and some criminal defendants, had created a “culture of fear” in Galveston, where he was the lone federal trial judge for about 17 years before being brought to Houston after a reprimand from the judicial council for sexual harassment.

Prosecutor Peter Ainsworth said this is an unusual case because of the repeated sexual assaults and devastating impact on the victims, and because of Kent’s repeated assaults on the justice system.

It is worth noting that an internal judiciary investigation of the same charges (in 2007) simply transferred him from Galveston, where he had been the sole federal judge for 17 years, to Houston.  There is a brief but friendly account of this investigation here, Will Judge Samuel Kent be Impeached?, in comment 4.  More to the culpable point: Fifth Circuit Covers Up Serious Judicial Misconduct

I would recommend investigating every member of that investigatory board — in my experience, sociopaths take care of their own.  I learned long ago, from sociopathic HR officers, that sociopaths have self knowledge and a group identity.

I wouldn’t describe this group feeling exactly as loyalty.  I would say that it’s more visceral than that, I believe sociopaths simply can’t stand to see one of their own brought down by a non-sociopath (similar to the proverbial “pain in the head”).

Cathy McBroom, Kent’s former case manager, said he “bragged” about his ability to intimidate people. “He told me everyone was afraid of him.”

McBroom’s complaint began the case, which expanded when allegations from the judge’s secretary Donna Wilkerson were added.

McBroom said making the complaint had been “incredibly stressful” and led to the breakup of her marriage and the loss of her home. She said it forced her to give up what she considered her dream job and put her entire life under a public and legal microscope.

“One would think I was the criminal,” said McBroom, 50.

Kent, speaking softly as he stood before Vinson, described himself as “completely broken” and “in some ways a better person for that.”

Notice the transition from arrogant bullying and braggadocio, displayed not only during his judgeship in Galveston but also at the beginning of the trial, to abject begging.  In my experience, sociopaths are both shameless and prideless — whatever works is their credo.  Prideless begging is simply the manipulation he thinks the situation calls for (while bullying was the manipulation called for in other situations) — Kent is communicating nothing about his inner state or acceptance of blame.

Items of interest, some recent,some not so, some that suggest possible sociopathy, some that scream it