From a comments exchange:

Anonymous:  My personal take is that we should refrain from exposing people’s faces to make a guess on their personality, at least point blank as done here. This is ‘Kitchen’ psychology at best, and may lead to innocent people being blamed for ‘obvious’ personality disorders. In fact I saw a German female ASMRtist being harassed on YT for having this ’empty look’ in her eyes. I don’t know why this is, but since a few years people here in Germany seem to be eager to pick on fellows that don’t appear to be normal. Maybe related to that Jungle Camp series airing now and then, where a bunch of people is isolated in a camp and watched mobbing/harassing each other everyday, allowing publicity to vote on the characters. Please takes this into consideration.

Pathwhisperer:   I understand your point. It is a slippery slope. But here is why I fundamentally disagree with you.

I absolutely do not accept that my blog advances ‘kitchen’ psychology. If the expert psychologists assert that psychopathy is so rare that most people will never meet one, then those experts are either stupid or psychopaths themselves. The DSM documents (Diagnostic and Statistical Manual of Mental Disorders) are evil in intent and written by evil people (psychopathic or otherwise). Among other crimes the DSMs have led to the pharmacological treatment of normal teenagers, affecting their normal brain development. Regarding the DSMs creating the category of anti-social personality disorder while pretending psychopathy doesn’t exist, I can only conclude the Personality Group (without looking up the formal name) is controlled by psychopaths and is acting in their interest. I was once going to do a post on the particular individuals in this group with the goal of ascertaining which were likely psychopaths, but have never gotten around to it.

My point in the previous paragraph is that if the so-called experts have failed us, and they have, then we are on our own. It’s not kitchen psychology, it’s survival psychology. We are dependent on our own wits.

Regarding Paul Horner’s and Skylar DeLeon’s appearances, I stand by what I say. But please note, I have never done a post on ‘psychopathic eyes’, even though noticing them is one of the most powerful tools in recognizing psychopaths (along with noticing unusual arrogance, complete lack of morality, etc.). I have never written that post for multiple reasons: 1) I’ve come to realize that this blog is intended as a negotiation with psychopaths, a ‘why don’t you guys just behave’ endeavor, it is in the interest of that endeavor (practical or impractical) that they feel they can blend in and disappear into the population; 2) a psychopathic friend of mine upon greeting me one day started crying, I thought ‘Oh, oh, a hit’s coming’ (sometime I think they all know each other), why would I want him to feel uncomfortable? (An attempted hit did take place. It involved psychopathic members of the NYPD, I was almost slammed into a barrier on the Jersey Turnpike — this was shortly after a private communication to Philip Eure before he assumed his duties as NYC Inspector General for the NYPD, offering my help in identifying psychopathic individuals in the NYPD. I state the above as a fact, the NYPD can sue me, in fact I wish they would, discovery would give me subpoena powers.)

Every single aspect of Paul Horner screamed psychopathy at me, his eyes, his flat affect voice, his laugh, his postures, etc. In terms of your statement of some Germans seemingly “eager to pick on fellows that don’t appear to be normal.” That is a real danger. We are all taught not to judge books by their cover, but what if sometimes you can? From my undergraduate years studying anthropology, I recall numerous discussions of the relatively high murder rates in hunter and gatherer societies. They routinely killed odd acting/looking people (to protect themselves from psychopaths?). I have no doubt that that fate would have befallen hunter gatherer Paul Horners and Skylar DeLeons.

The populations of the U.S. and western Europe are desperate as the middle class is being destroyed and their world is collapsing. Many bad possibilities may happen.

An obvious at a glance psychopath.  Anyone with these looks is also a psychopath.  If you ever hear an interview please note his affectless voice — an obvious by ear psychopath.

“Anyone with these looks is also a psychopath” — hmmm, here’s an example.

This is Richard Holbrooke of course.  Please note I’m not merely suggesting he be evaluated as a possible psychopath, I’m stating he is (not merely or even mostly on looks, I know quite a bit about him).  Now one is free to say, “Whatever, your statement is really just an opionion and I don’t accept it.”  And one is free to be wrong too. 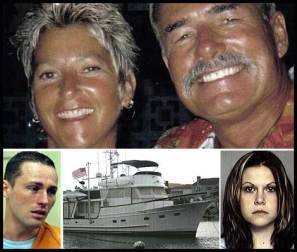 Picture from “Murder at sea: ‘couple thrown overboard tied to an anchor’ claim“.

I look for news items featuring (in no particular order) preternatural lying abilities, an arrogance with no discernible justification (and a related contempt for others and extreme “watch me get-over” attitude), beyond-the-pale crimes, a willingness to simulate the most intimate emotions, individuals who view others as pawns to be manipulated or even destroyed for the enjoyment or greater glory of themselves, the ability to effortlessly and artlessly turn on sincerity, etc.  All of these have to be far above and beyond normal faults, crimes and vanities.  As always I’m simply suggesting that the following news stories merit the consideration of sociopathic elements.

“He humiliated, degraded and took what he wanted from them. He was a predator who took advantage of the weak people around him. He has no criminal sexual borders. If he didn’t use force, he laced their drinks,” prosecutor Frances Young told the jury. Jon, whose full name is Anand Jon Alexander, denied the charges. His lawyers said the girls and young women were revenge seekers who had made up their stories or who had “invited what happened,” and that there was little physical evidence.

http://www.popeater.com/television/article/celeb-designer-guilty-of-rapes-assaults/248201
Blaming the victim is very frequent in the defense of sociopathic crimes.  Also one will often see sociopathic defendants testifying in their own behalf (or even representing themselves) when it is not at all in their interest to do so.  However their imperial ego can’t imagine defeat, they can be almost pathologically optimistic.

A drunken Jersey City councilman was arrested for urinating on a crowd of concertgoers from the balcony of a Washington nightclub, police and club sources said Saturday.

“He was very drunk,” the source said, noting that it wasn’t the first time Lipski had caused a ruckus at the popular concert venue. “We’ve dealt with this man before,” the source added. “He’s never peed on anybody, but he gets really belligerent and drunk.”

IMO, one should always pay very close attention to anyone whose behavior goes totally off the scale when intoxicated – no matter what the individual’s station in life, education or title.  The slim self control a sociopath may have in the best of times can be totally lost when drunk.  Hervey Cleckley in the attached Mask of Sanity (p. 355) writes:

57. Fantastic and uninviting behavior with drink and sometimes without

A major point about the psychopath and his relation to alcohol can be found in the shocking, fantastic, uninviting, or relatively inexplicable behavior which emerges when he drinks

Alcohol, as a sort of catalyst, sometimes contributes a good deal to the long and varied series of outlandish pranks and inanely coarse scenes with which nearly every drinking psychopath’s story is starred. Free from alcohol, such a patient would scarcely sit under a house all night idly striking matches, or, concealing himself behind book stacks, urinate from the window of a public library on passersby in the street below.

His wife, identified as Teresa B., said on private TVN24 television that the man used to order her to watch television whenever he went into the girl’s room, closed it and took out the door handle.

This story is both similar to and quite different from the crimes of Josef Fritzl (https://pathwhisperer.wordpress.com/2008/05/23/reflections-on-josef-fritzl/) — illustrative of the complex crime and ramifications of incest.

How AIDs and its spread hasn’t put sociopaths on the public radar is beyond me.  I can very easily imagine sociopaths doing the above.  At their level of personality development if they hurt they want the world to hurt.  To hurt and not act on that hurt is interpreted as an attack on the self.  Many of them never reach the stage where there is a self separate from their wants and hurts.

An early job of mine was as an international phone operator, back in the days of electrical switchboards with multiple leads.  I had a co-worker who was friendly and fun loving but with some odd habits.  Whenever he had a difficult customer that left him feeling insulted he would afterwards call up one of his standard “whipping boys,” customers that he considered good for a few laughs.  As a sociopath, which I certainly didn’t know then, he was unable to internally handle his emotions.  If he was hurting someone had to pay, even if that someone had nothing at all to do with the hurt.  Not to express that hurt would have left him feeling angry and frustrated.

I recall a case from a few years ago of several dental patients who came down with the same strain of HIV that their dentist had recently died from, but no likely transmission mechanism could be found.  I think it was probably intentional for the same reasons.

The so-called AIDs Patient Zero, Gaetan Dugas, was a sociopathic flight attendant with hundreds if not thousands of lovers of both sexes (since sociopaths only know friction orgasms, the more, the merrier).  Since then, sociopathic AIDs victims with no concern for others have been a real problem for both gays and straights.  I once read in a Gay Men’s Healthcare article a discussion of whether to publicize the role of amoral sociopaths in the spread of AIDs, but the decision was not to, since they wanted the focus to stay on the danger being the disease AIDs and not the carriers, as I recall.

RALEIGH, N.C. (Oct. 16) – A Georgia grandmother who came under suspicion because all five of her husbands had died was released Thursday from a North Carolina jail where she had been held on charges in one of their deaths.
Betty Neumar, 76, posted $300,000 bond late Thursday morning at the Stanly County jail, where she’s been held since her arrest in May, Sheriff Rick Burris said.

SANTA ANA, Calif. (Oct. 20) – A man was convicted Monday of murdering three people, including a couple who were tied to an anchor and thrown off their yacht off the California coast [after posing as a prospective buyer].