Sitting immediately behind Kellyanne Conway and Melania.  In line with Father Jenkins.  And across from Mike Lee and Kayleigh McEnany. 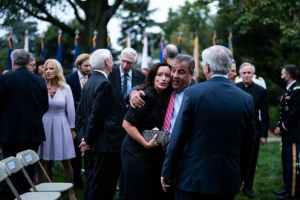 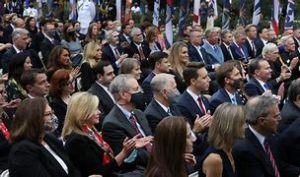 His name is C. Boyden Gray.  While there is no plastic boutonniere secret atomizer visible the cases do tend to circle him. 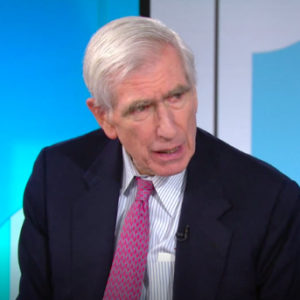 Now I haven’t described any behaviors or thinking patterns of his to support my claim of his psychopathy.  I know very little about him.  He’s a man of mystery to me, perhaps one of the deepest actors of the deepest part of the deep state.  I don’t know.  However his psychopathy is obvious.  Remember last class?  The Green Beard evolutionary strategy demands that psychopaths be able to recognize each other.  But that also means that others can also frequently recognize them.

I’ve decided to take pics of annoying neighborhood psychopaths (or probable psychopaths).  The criteria could be almost anything.  1) I might find them annoying for no known reason, that’s good enough for me.  If my emotional reaction says they are annoying, I assume the cause just hasn’t reached my consciousness yet.  (I’m with those who say every psychological growth stage is still within our psyche and can be drawn on.  I urge everone to reintegrate with their 5/6 year old self who knew whom they liked or trusted).  2) It might seem to me that I run into them too often.  3)  It might seem that they keep showing up in too timely a manner as though checking up on my health after attacks. 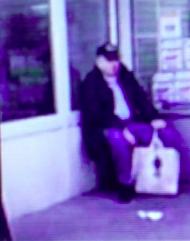 Unfortunately this is a pic of a pic.  I do have him on higher quality video also.  Regarding the above I would say that he qualifies on all 3 categories above.

A nearby store has been the site of a number of anomalous occurrences (were they more than that?, you tell me).  I hesitate to discuss such matters, it seems to lose me visitors and commenters.  Oh, well.

I used to go to this store almost everyday for a coffee and a pastry.  One day there’s an individual, whom I had never seen before, in front of me at the self serve coffee machine.  Nothing unusual, except I really disliked him, for no known reason.  And then, he left the milk out for me — ah, a nice guy.  Then I see there’s only enough milk left in the carton for one cup of coffee.  That’s odd.  Then I see there’s another open milk container in the refridgerator section.  That’s very odd.  I’d never, ever seen two open cartons in this very small store at the same time.  Who wants a stinking coffee anyway?  Two anomalies are enough for me to alter my path.  There was also at least one more anomalous event concerning a cup of coffee there.

I also used to buy a particular chocolate bar almost everyday.  One day I went in and there were 7 – 8 individuals crowded around the cashier at the candy counter.  I had to sort of push through just barely able to reach the bars.  However somebody had conveniently left a bar sitting flat on top of all the others making it easier to grab, what a nice person.  So I grabbed it and left a dollar on the counter.  Then as I left with chocolate, I suddenly realized that all the people around the counter knew each other and were sort of moving in coordination (obviously I trust messages from my subconscious).  Plus the responses of the few that I had to squeeze by with ‘excuse me, excuse me,” seemed wrong to me.  One of the things that is impossible in this world is pretending not to know someone (it doesn’t matter if they pretend to ignore you or if they engage with you).  They recognized me.  Who wants a stinking chocolate?

The individual in the pic didn’t play a part in any of the above occurrences.  But he did play a peripheral part in another anomalous event.  I have to qualify this story as being from the ‘I’d never believe it, if it hadn’t happened to me’ file drawer.  There was another store where I would often buy a particular item.  One day as I approach the door I see the same neighborhood psychopath (or likely psychopath) chatting with a plain clothes policeman sitting on a milk crate pretending to be a homeless panhandler (recognizing undercover cops).  OK.  Then immediately inside the door there is a fake mentally ill homeless person wearing five or six shirts.  OK  How do I know he was fake, his ‘intent’ was all wrong.  Then I noticed that he actually wasn’t doing anything, just standing there.  So I went over to the proper shelf, and there was only one sample of the item available.  OK.  Then, in the line, the guy behind me struck up a small conversation — but he didn’t look at me as though I were a stranger.  OK.  Then as I walked from the front of the line to the cash register clerk, he suddenly said , ‘oops, he had forgotten his money and would have to come back’ and left the line.  OK.  However both he and the five shirt fake mentally ill person seemed to suddenly relax and almost smile at my making the purchase.  Hmm.  Then as I left the store I stepped around the corner of the building to make a cell phone call.  Then the fake homeless cop almost knocked me down tearing around the corner carrying his milk crate as though his shift was over.  Hmmm.  That’s too many anomalies for me, who wants this stinking item anyway?

The fake homeless cop (undercover cops use this ruse quite frequently) would be easy to ID.  He’s around 6′ 2 or 3″, ruddy complextion – would sun burn easily, 40s maybe, lanky physique but very muscular, tousled dirty blondish hair, 2 or 3 inches, toothy, rangey (if that means anything), etc.

Some might say all the above have credible reasons for happening as they happened and that I’m imagining things.  OK, maybe, but I don’t think so.  I say that the reason that I’m alive and Kathy Krajco, Linda Mealey and others are dead is that I read intent and they didn’t.  There are some 12 to 15 psychopathy truth martyrs as I look at it, a few had mysterious deaths, the others died from seemingly natural disease processes — but I wouldn’t bet money that that was true.

Another day I’m sitting in a local coffee shop.  I notice a psychopath I’d never seen in the neighborhood before in the ordering line.  However, he displayed no intent of actually desiring a coffee or a bagel, displayed no ‘yum, yum, yummy, I can’t wait for my bagel’ anticipation.  Further I suddenly realized (there I go again) that his intent was hostile and that I was his target.  He left before me.  As I left some 5, 10 minutes later, I see him walking at an angle to intercept me.  So I walk along and suddenly stop when we are about two feet apart and we stand there staring at each other.  That’s close enough so there are no secrets and it was obvious that this psychopath knew and hated me.  But I actually didn’t sense any intent of immediate harm.  I’ve noticed before that sometimes psychopaths like to ‘mark’ their targets.  The actual attack took place later that day.  In NYC there are often one/two story scaffolds up around buildings for building inspections.  The way they are built funnel pedestrians into two lanes and if there is a sidewalk cafe into one lane.  You could call it a double pinch point.  So I’m walking through such a double pinch point (across the street from the first cafe) and suddenly someone rushing by me brushes me physically in his hurry.  I’m thinking,’whoa, I guess he was in a hurry.’  Then, ‘wait a minute, that was with purposeful intent, he brushed against me purposely, what’s going on here?’  So I spun around and there’s a woman around six inches behind me, holding her purse up to her chest with one hand, while removing something from it with the other, while staring intently at what had been the back of my head.  She must have moved in close in coordination with the brush by, I was supposed to notice only the brush by.  Unfortunately I didn’t have the presence of mind to tackle her and empty her purse.  She snatched her hand out of her purse and just hurried away.  A fentanyl swab behind the ears (http://time.com/khaled-mashaal/)?  A psychotic anxiety level causing agent (i.e. to cause suicide)?  A prussic acid aerosol to cause a heart attack (or something more up to date)?  Who knows?

Anyway, the idividual pictured at the top has lately been looking at me like the cat that ate the canary, so I decided to write this down.

This is a follow up to “It seems I’m being harassed”.

To the superiors of Commander Smoked Glasses:

Call off your dogs.  You should know that Smoked Glasses is on several video cameras as is also the cute blond with the throat mike.  You should also know that he is using two inside individuals who know me personally, one a sociopath, one hundred times more arrogant than intelligent, and the second a weak artistic type amateur.  These two clowns couldn’t pick up a quarter off the sidewalk without telegraphing to the world what they were doing.  They are the only reason I know the operation is still going on.

The amateur is the weak link.  I have sent more detailed paper versions of this message around in case of any eventuality.

From the Obviously-Just-A-Coincidence department:  the very same day that this posted, my cell phone memory was erased and a password was required for access, just a coincidence I’m sure.  OH, NOES! What about my hard evidence this isn’t my imagination?  Not to worry, not to worry.