No.  1) Psychopaths are fully evolved intraspecies predators.  2) There is no relationship whatsoever between narcissists and psychopaths, the first is a psychological/emotionally disturbed condition (or maladaptation, or choice), the second is a biological condition.  They only appear similar. 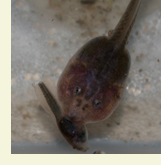 Among spadefoot toads some tadpoles become cannibals while the rest eat algae (http://www.centre.edu/web/news…..storz.html). If there is enough food and the water doesn’t dry up (which is the norm) the normals keep their numbers up and things are more or less in balance. If the ponds dry too quickly then the faster growing cannibals are much more likely to survive to adulthood and reproduce. If the proportion tips in favor of the cannibals they eventually have to turn on themselves and the population crashes. In the rebuild, the normals again come to the fore. Rinse. Repeat.

Dr. Robert Hare describes psychopaths as “intraspecies predators who use charm, manipulation, intimidation and violence to control others and to satisfy their own selfish needs.” They lack conscience, they take what they want and do as they please, without guilt or remorse. “What is missing, in other words, are the very qualities that allow a human being to live in social harmony.” http://en.wikipedia.org/wiki/Psychopathy

“One of the more startling examples of the two types of males is in the Sumatran orangutan. The species is famous for male bimaturism. Some males mature fast, developing their bodies and growing the distinctive folds, or flanges, on the sides of their faces. Other males keep a juvenile look, sometimes for as long as twenty years after becoming sexually mature. These juvenile-looking males can get chased out of a territory by a mature male, but much of the time they’re ignored. Biologists thought that this was a typical sneaker strategy. The unflanged males looked too young to be worth fighting.” http://io9.gizmodo.com/natures-sneakiest-males-and-how-they-win-where-alpha-m-1678927415

“Chinook salmon swim up river every year to spawn. Two kinds of males make the trip. Jacks are small, slender fish that sexually mature fast without putting on bulk. Hooknoses mature slowly, spending more time in the ocean feeding and fattening up. The difference between the two is dramatic, as is the difference between their technique. Hooknoses are big and bulky, and can fight off other males, but when it comes down to it, maneuverability is key. Jacks can dart in at a crucial moment, releasing their sperm and fertilizing the eggs the hooknose fought for.”  http://io9.gizmodo.com/natures-sneakiest-males-and-how-they-win-where-alpha-m-1678927415

George Simon, PhD, somehow makes the mistake of thinking psychopaths are the only known intraspecies predator.  This isn’t so, see spadefoot toads above (I’m sure there are others also).  But his understanding of psychopaths is right on:

Psychopaths are the only known intra-species predators.  [. . .] they consider themselves superior creatures compared to common humans.  They have the most malignant form of narcissism.  They know all too well how different they are from the rest of us but don’t consider this a shortcoming.  Rather, they consider themselves more than “special.” They consider themselves distinctly superior to those who possess two characteristics they don’t have:  empathy and conscience.  The way they see it, folks with a heart and with those things the rest of us call “qualms” are an inferior breed, the perfect patsies, and their rightful prey.  http://www.manipulative-people.com/serious-abusers-and-psychologys-failure-to-understand-them/